A Journey from Ancient Artefacts to Modern Materials

Nuts & bolts. Screws, nails and rivets. These common steel fixings and fastening devices are so common and recognisable that we often don't spare them a second glance, trusting that they will perform the function in which they are intended to. What people don't generally realise is that these components are based on ancient inventions, many of which have changed little in form since used by our early ancestors as they shaped the world around them. This fact was brought into sharp focus for Stuart Peers as he skimmed his metal detector over a field in South Marple one rainy morning…

After seeking and being granted permission from the landowner, history enthusiast and amateur archaeologist Stuart set out with his trusty metal detector across some pasture land local to his home on an ordinary finding mission. Little did he know that the detector would, almost immediately, start loudly beeping, prompting him to excitedly get out his shovel and start digging.

Not too far down, Stuart located his prize but, covered in clinging mud and clay as it was, the bulky shape was completely unrecognisable. Bundling up his find for safekeeping, Stuart hurried home to clean it up and see what he could make of it. When the artefact was clear of all dirt, however, the mystery only deepened further.

Nick Herepath is the Portable Antiquities Officer at Liverpool Museum and works across the northwest of England. Upon examining the artefact found by Stuart, Nick quickly identified it as a belt fastening from the 14th-15th century, recognised from a practically identical item in a catalogue of medieval dress. The belt fastening was designed to adorn a very thick, strong and heavy belt of fine leather and consists of a buckle that would have incorporated an iron rivet - this has rotted away to nothing in the intervening years.

Stuart adds the astounding centuries-old clothes accessory to his collection of finds, which include an axe dated to c1500 BC (the time of the Bronze age, when rivets were also first developed by skilled sword makers), a 17th Century golden ring plus lots of coins spanning periods of time from Roman to Victorian.

Though the basic components themselves have changed little, the materials and methods used to create them have changed dramatically, opening up whole new worlds of possibility. Stainless steel fastenings and fixings are used for a massive array of applications - let us know by contacting us to find out how we can facilitate your unique project. 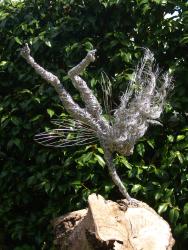