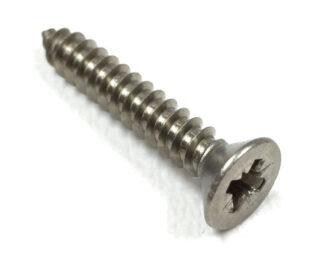 Clearly, 'tapping' and 'drilling' are two very different verbs though the terms 'self-tapping' and 'self-drilling' are often used interchangeably. This casual application of terms can be misleading and, when applied to screws, is most definitely incorrect.

This is the term most commonly (mis)applied to either of the two types. Self-tapping screws have the ability to advance during the driving process itself, which creates new threads for itself as it goes (compare this to, for example, machine screws, whereby a pre-threaded cut must first be made in order to achieve a successful result. Self-tapping screws feature a continuous cutting edge manufactured to accurate tolerances which 'taps' away the material it is used on. Contrary to popular belief, it is this edge that is responsible for the bulk of the tapping work and not the screw's point.

We stock a wide range of styles and sizes of self-tapping screws to meet with the requirements of any project. Styles include slotted, pozi, pozi pan and countersunk.

Self-drilling screws available from BS Fixings are manufactured by Goebel. The zinc-plated, slotted hex-head screws are extremely versatile and are sold in convenient packs of 500.

If you need any more information on the differences between various types of screws, just give our expert team a call for clear, concise and competent technical information.