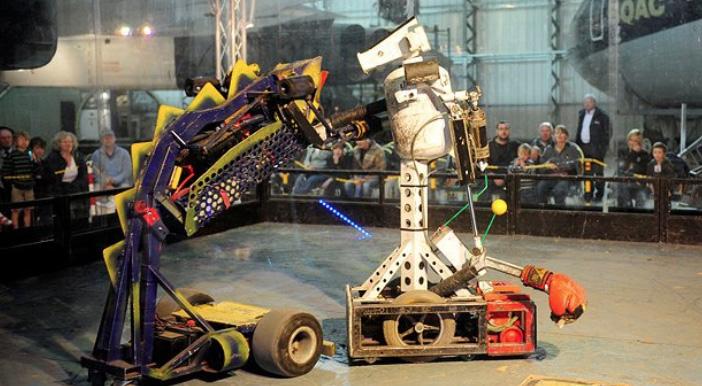 Fans of the iconic Robot Wars series excitedly received news that the show would be making a return to our screens this year - and what a return it looks set to be! Those who were unable to wait for the screening of the new series made their way to various locations in the UK to see it actually being filmed as a lucky member of the audience! And guess who was there too…?

That’s right, your faithful writer grabbed himself a seat at the show at EventCity in Manchester recently! And what an experience it was - my ears are still ringing from the smashing, crashing and rending of metal, much of which was our favourite - stainless steel. Taking the show on the road to be filmed is an excellent idea, allowing more fans to see it live and providing a truly unique and unforgettable experience - including me!

You probably know the format - big, bad homemade robots are pitted against each other and the fearsome house robots, as well as having to take on single challenges to demonstrate dexterity. I took my seat, put on my giant sponge claw (a Robot Wars tradition) and settled down for some action!

I wasn’t sat down for long though, as almost immediately the house robots came on to massive cheers. Old favourites such as Master Damage and Matilda were paraded for admiration alongside new, even more frightening-looking machines. Then the competitors and their own robots were introduced and the fighting started! Strobe lights flickered, smoke rose and the music boomed in competition with the banging and smashing of robots, added to by a frenzied crowd (of which I must admit to being a rather loud member!).

Matilda was the star of the show I attended, making light work of many robots. It is a little bit sad to see the faces of people who have worked for months as they watch their creation disposed of in a few short, lively seconds but the show is about survival of the fittest and there is absolutely no room for weakness, especially where Matilda is concerned.

All of the robots in the show, not to mention the arena itself, are heavily reliant on the use of stainless steel components - nuts & bolts, screws, rivets and more are all used to give these robots their strength, power and capacity for movement. It was a fantastic experience visiting the Robot Wars filming event and made me realise just how important stainless steel is - it facilitates our transport, medicine, industry and entertainment in a million different ways.